The Chicken or the Egg?

Genetics are a hobby of mine, and I do not proclaim to be an expert by any means. This is just a fun little discussion I had with myself while theorizing the true answer using genetics and crude drawings. This is just for fun, if it happens to interest you. 🙂

I can prove that the egg came first.

The egg is the source of life, and using natural selection, it can be proven that the parents of the first chicken egg do not have to be chickens themselves. They just have to be close to it.

First, we have to define a “chicken” for the sake of this argument. Let’s say it’s a chicken if it has the following attributes: no teeth, short beak, limited flight, yellow skin, and caruncles (those fleshy combs on their heads and neck). These are mostly arbitrary and are only meant to serve as an example for what defines a chicken as opposed to its ancestors. (The dinosaurs?)

Now that we have defined the chicken with attributes, we have to assign genetic alleles to the traits in order to hypothetically track them. Since we are theorizing about the arrival of the first egg that holds the first chicken, we have to assume that no one has ever seen one before, and that all they have seen are these wild pheasants with teeth, long beaks, extended flight, gray skin, and no caruncles. These traits would have to be dominant to keep reappearing generation after generation, but those recessive traits that make a “chicken” can keep carrying over while never displaying. Until they do.

Keep in mind that these are simple genetics with only two opposing traits and only two-tiered hierarchy. Genetics can get quite a bit more complicated than this, but we won’t get into that right now.

With the possible pairings above, the recessive traits will only show when both alleles are lowercase, therefore homozygous for recessive. If a Dominant allele is present, it cannot express itself on the “almost chicken”, but it can pass down that recessive allele to an offspring where it may be expressed depending on the other parent.

Now, you use Punnett Squares to determine how genes can pass with the understanding that each allele can pass independently. It looks like you’re playing tic tac toe. See the image below where I have hand-drawn images showing a Punnett Square for the first gene.

To speed up this process, let’s assume that the parents are both heterozygous in all their genes, meaning they have both a Dominant and a recessive allele for every pair. They would both look like this: (Tt, Bb, Ff, Ss, Cc). Obviously, it could take many generations to reach two specimens that have this unique arrangement, but we’ll skip that part for now. Instead, we’ll consider these parents Gen 1 (G1).

Each allele goes into its own column and it gets dragged down into its corresponding box. From the four possible outcomes, we can see that we have a 25% chance of TT, 50% chance of Tt, and 25% of tt, which is the first chicken attribute. I could draw squares for the remaining gene pairs, but they’ll have the same outcome of this, for example, 25% chance of BB, 50% chance of Bb, and 25% chance of bb, and so on.

It’s more likely, however, that we’ll need a few more generations before we get our first “chicken” out of “almost chickens” who start to show more recessive traits. From G1 parents, let’s say we get something like (Tt, bb, Ff, Ss, Cc) and (Tt, Bb, ff, ss, Cc), which is still a little generous. Let’s say there were a lot of eggs, and we picked the best parents for our goals. Then we would have two “almost chickens” respectively presenting with short beak, limited flight, and yellow skin. These parents are labeled G2.

Now here is the new pairing we are faced with and its corresponding Punnett Square: Bb and bb, Ff and ff, Ss and ss. 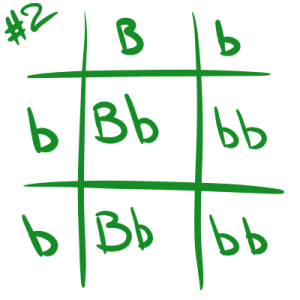 This part might trick you. You might look at Bb and bb and see three lower case b’s, and your brain might want to think that you have a 75% of getting bb. That’s not how it works. As you can see from the square, we have a 50% chance of getting Bb, and 50% chance of bb. The odds are getting better. The same ratio is true for the F and S pairs in this example.

In this way, we can keep breeding each generation until we get something that looks more and more like a chicken. We’re getting close. The last absolute two parents we would need are (tt, bb, ff, ss, Cc). They’ll have the same gene string. That’s so close. The only thing missing are the caruncles. Everything else is chicken, so we have the best “almost chickens” we could possibly get. This might happen as soon as G8, or later than G16, depending on how many eggs are laid and which parents are selected. Of course, just how lucky you get with what eggs are laid plays a roll, but that’s too hard to measure. We’ll call these parents Gn, since we don’t know how many generations it could take.

So the Cc pair are the same for both parents, so we have the same Punnett Square as our first one. I’ll redraw here though with the new alleles for convenience: 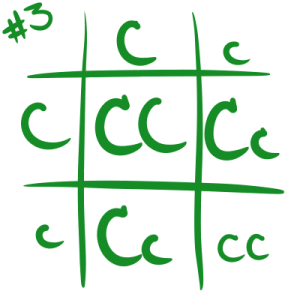 At this point, all the other gene pairs are homozygous, so they will always pass on their recessive alleles because that’s all they have. We don’t have to worry about them in the calculations, so for this example, we only need to focus on the final pair. The chances are, like before, 25% for CC, 50% for Cc, and 25% for cc. We need to hit a 25% chance to get our chicken, and this is our best chance.

Therefore, the eggs from Gn may hold the first chicken, but they do not come from “chickens”.

Since I didn’t do this pairing before, I’ll insert a Punnett Square for the only pairing we didn’t really do, which is TT and Tt, and shows how you’ll be able to get a recessive started in a line by bringing it in from a hybrid crossed with a purebred “almost chicken”. 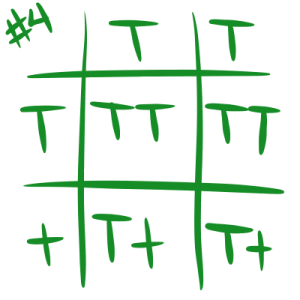 As you can see, you have a 50% chance of TT, and a 50% chance of Tt. While this crossing does not produce any chicken-presenting attributes, their grandchildren might. It’s a slow start, but it’s how recessives are introduced.

Hope you all enjoyed this as much as I did! 🙂